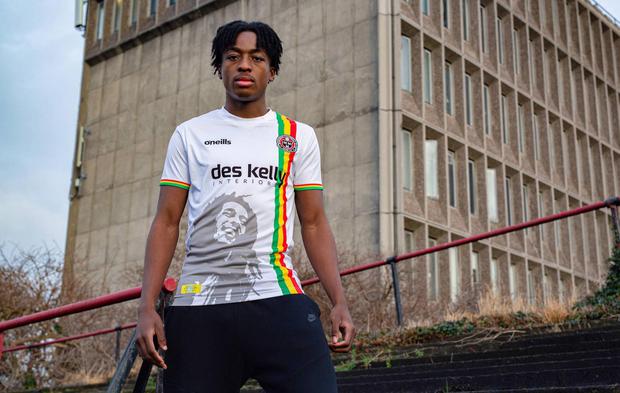 It’s rare, if not unprecedented, for a League of Ireland football club to make ­headlines around the world. Yet this week ­Bohemian FC did just that — ­earning ­mentions on the BBC, the ESPN sports network in the US, the British music bible NME and even Forbes, a US magazine more accustomed to documenting the lives of the super-rich.

The club tried to introduce a similar jersey in 2018 but withdrew it following objections from the reggae legend’s estate. This time, his family have given their blessing. A portion of sales will go to Masi, the Movement of Asylum Seekers in Ireland.

For anyone who can’t see an obvious link between the singer and the club, let’s take a trip back to the late 1970s. The face of live music in Ireland was changing. Rory Gallagher headlined the country’s first outdoor rock festival at the Macroom Mountain Dew in Cork in 1977. With the powers that be in Croke Park and Lansdowne Road uninterested in something as frivolous as a rock concert, it was left to Bohs’ home ground, Dalymount Park, to pick up the slack in the capital. Later in that long hot summer it hosted a show by Thin Lizzy, and then in 1979 it was Status Quo’s turn.

Bob Marley and the Wailers would grace the stadium the following year — but it almost didn’t happen. Like so much in Ireland at the time, religion played a part, according to Pat Egan, the show’s promoter.

“We originally wanted to do it in the RDS and the RDS refused it on the grounds that his religion was seen as a threat,” Egan told me when the original shirt was launched. “He was a Rastafarian and they didn’t want a ‘cult’ figure coming in, so they turned it down.

“Up in Dalymount, they didn’t give a s***. I’m from around that area so I knew a few of the people involved at Bohs. They didn’t really care once they got the money — that was what it was about.”

After noise complaints about the Lizzy and Quo shows, the concert was scheduled with an afternoon start to keep residents onside. But there were other issues. “The drugs situation in Dublin was starting to build momentum,” Egan recalled. “One drugs gang had their fingers in all kinds of intimidating things and we had to deal with them.”

The RDS’s conservative attitude was reflected in some of the press coverage at the time. There was tut-tutting about Marley’s open relationship with his wife and backing singer, Rita, and speculation that he wouldn’t come to the country unless he was allowed to bring a supply of marijuana.

As things transpired, that wouldn’t have been necessary.

“On the day of the gig, this drugs gang delivered up a big parcel of hash for Marley,” Egan said. “It wasn’t asked for but it was brought up as a kind of gesture from them. So they had to get into the dressing room and see him and shake his hand.”

With 23,000 tickets sold, the crowd swelled to about 30,000, with counterfeit tickets in plentiful supply.

Unsurprisingly, the atmosphere was laid back, as photographer Eddie Mallin, who captured the day, remembers. “Outside was chaos. Lots of fellas fairly drunk or stoned but all really good-spirited.”

Marley dedicated his encore to the Irish struggle. What nobody in attendance realised at the time was that they were witnessing the final occasion that he would play an outdoor gig.

The melanoma on his toe that he had previously shrugged off as a football injury was already spreading through his body and would soon reach his brain. He died less than a year later.

With hindsight, Egan realised the signs were there, but it was still a shock when he discovered just how ill the singer was.

“He signed something for me at the airport before he left the country and he didn’t look well,” he said. “He looked very sallow and his skin colour was off; it was very yellowy.”

While Dalymount hosted gigs until 1994, Marley’s death meant that the Dublin date took on a special place in the singer’s legacy and in the history of music at the venue.

Bohs fans took to chanting “Don’t worry, about a thing / ’Cause every little thing gonna be alright” — the chorus of Marley’s Three Little Birds — as the club battled bankruptcy a decade ago. No visit to Dalymount is complete without a rendition.

It’s now over 40 years since the festival and Mallin is still contacted regularly about the roll of film he took on that day.

“The only problem I had was that it was a daytime gig,” he said. “Out of a roll of 36, I only got five or six good shots. [But] Marley is iconic. You like the images to be technically good but it’s not the most important thing. Of all the photos I’ve taken, they’re the most famous ones because of who they’re of.”

So having already left his mark on Dalymount Park, this season the great man will be coming to a League of Ireland ground near you. Kind of. Woman lay on pavement for six hours after she broke hip

World Down Syndrome Day: ‘John embodies many wise ways that most of us will spend a lifetime trying to achieve’