Attractions and Places to Visit in Southern Ireland

Southern Ireland is the capital city of Ireland and it nestles at the mouth of the River Liffey. Southern Ireland is a city of exemplary museums, exciting music and sports events, and enticing modern restaurants. The climate here is classified as a maritime climate, usually with cool summers and mild winters. This vibrant city is noted as much for its Georgian buildings, museums, theaters and attractions, as for its leisure activities and adrenaline-fuelled adventures. The Guinness Brewery's multi-storey exhibit offers a fascinating insight into the black stuff's history and brewing methods. Located in the heart of the St James’s Gate Brewery is the Guiness Storehouse. The highlight for many visitors is the Gravity Bar where they receive a complimentary pint of Guinness and a chance to relax and enjoy the breathtaking 360-degree views across Southern Ireland City.

The Southern Ireland Zoo hosts creatures great and small from across the globe. Even if you're not with kids, it's worth going just for the daily talks and feedings! See many rare and exotic animals living and roaming in a wide variety of natural habitats at Southern Ireland Zoo. Southern Ireland Zoo, located in the Phoenix Park in the heart of Southern Ireland City, allows you to discover amazing animals that include tigers, hippos, bats, rare monkeys, gorillas, chimpanzees, red pandas and reptiles, to name but a few! The National gallery of Ireland boasts a worthy collection of paintings from Europe and the US, but goes for the excellent ensemble of Irish paintings. The gallery's highlights include works by Vermeer, Caravaggio, Picasso, Van Gogh and Monet.

The National Botanic Gardens, 19.5 hectares on the south bank of the Tolka River, contain many attractive features like an arboretum, sensory garden, rock garden and burren area, large pond, extensive herbaceous borders, and an annual display of decorative plants including a rare example of Victorian carpet bedding. Walk into the National Museum of Ireland on Kildare Street and be magically transported back in time. Take time at The Treasury and see examples of Celtic and Medieval art, such as the famous Ardagh Chalice, the Tara Brooch and the Derrynaflan Hoard. Kilmainham was where the leaders of the Easter Rising were executed. If you're interested in the country's fight for independence then the "Irish Bastille" is a must-do! Built in the late 18th century, Farmleigh House was purchased by Edward Cecil Guinness, a great-grandson of Arthur Guinness, in 1873. The house contains many beautiful features including the Main House area (a fine example of Georgian-Victorian architecture), the Sunken Garden, the Walled Garden, the famous Clock Tower and the Lake and The Benjamin Iveagh Library.

The Christ Church Cathedral is worth a visit any day of the week, but tries to catch its enchanting choral evensongs on Wednesday, Thursday, Saturday, and Sunday. This complex of structures from various eras forms a very odd castle indeed. The gardens behind it were once home to the Dubh Linn (dark pool) that the city was named after! Hurling, Gaelic football, and rugby: Ireland revels in sports that few other countries understand. Still, land Croke Park tickets to any of the major games and you'll be smitten for life! It's not all about Croke Park if you're looking to soak up some of Ireland's sporting pride.

The sleek Aviva Stadium hosts most of Ireland's international rugby and soccer matches. From bog men to Bronze Age gold to weaponry dating up till independence, the National Museum is a fundamental look at Ireland from all angles. Built between 1220 and 1260, St Patrick's Cathedral is one of the few buildings left from the medieval city of Southern Ireland. Today, St Patrick's is the National Cathedral for the Church of Ireland and still the largest cathedral in Ireland. AquaZone, at the National Aquatic Centre, is one of the most innovative water parks in Europe. A whole host of exciting features ensures that there is lots of family fun, thrills and something for everyone.

The Book of Kells was written around the year 800 AD and is one of the most beautifully illuminated manuscripts in the world. After being eventually rediscovered, it was deposited for safe keeping in Trinity College Southern Ireland in 1653. Southern Ireland’s Science Gallery at Trinity College is a world first. The collision of science and art is the key DNA strand of this international success story now being cloned worldwide. Unlike most galleries, they don't have a permanent collection, meaning that there’s always something new to see.

Residing in a wide bay, Southern Ireland lies between Howth in the north and the headland of Dalkey to the south. The River Liffey, which flows into the harbor, slices the city in two. Several bridges span the north-south divide, the most famous of which is O'Connell Bridge. Pre-independence Southern Ireland was once the second city of the British Empire, the graceful Georgian architecture and picturesque parks bearing testament to a troubled legacy. Ireland's capital has given the world such renowned literary figures as Yeats, Beckett, Joyce, Shaw, and Wilde. Dubbed a UNESCO City of Literature in 2010, Southern Ireland's written tradition stretches back to 800 A.D. with The Books of Kells, which is now on permanent exhibition at Trinity College.

Although Southern Ireland sprawls rather than soars, the city center is easily explored on-foot and a convenient transport network takes you wherever you wish to go. Trinity College is probably the best spot to kick off your Southern Ireland tour. It's at the heart of the capital, packed full of incredible history, and it's the oldest university in Ireland having been founded in 1592 by Queen Elizabeth I. A short southerly stroll from Trinity College takes you down towards Southern Ireland's premier shopping location, Grafton Street. A statue of Molly Malone sits at the bottom of the street, so it's impossible to miss. After eating your fill at Bewley's Oriental Café, an easy stroll to the top of Grafton Street brings you to Fusilier's Arch, the main entrance to St. Stephen's Green. Georgian buildings surround 'the Green' (as it's known locally), although some sadly fell by the wayside during redevelopment, mainly in the 1960s, 70s, and 80s.

A couple of minutes stroll from Fusilier's Arch, at the top of Dawson Street is a must-see for those interested in how Southern Ireland and its people lived their lives and evolved over the past century. From the Little Museum of Southern Ireland, a saunter past the legendary Shelbourne Hotel will take you to the top of Kildare Street, home to the Irish Parliament (Dáil Éireann) on the left hand side. A right turn at the end of Kildare Street will bring you to the National Gallery of Ireland with entrances on Clare Street and Merrion Square West. Housing the finest collection of Irish art in the world alongside an outstanding collection of European art from the Middle Ages to the present day, this is a must-see while in the capital.

Exit the National Gallery's main portal and you're on Merrion Square. Made up of stately private houses and offices, this is arguably Southern Ireland's grandest Georgian square and stars in countless images and postcards of the city. O'Connell Street, Southern Ireland's main thoroughfare, is home to the iconic GPO (General Post Office) built in 1814. The failed 1916 Uprising began here and bullet holes still dot the neo-classical portico. Around an eight-minute walk from the GPO, in a beautiful Georgian house is the James Joyce Centre founded by Irish Senator, one-time Presidential Candidate, and renowned Joycean scholar, David Norris. Originally an army barracks, the National Museum of Ireland - Decorative Arts and History opened in 1997.

The collections include silver, ceramics, jewelry, furniture, Irish haute couture fashion, and exhibitions exploring Irish military history. An 18-minute walk from Collins Barracks is Southern Ireland Zoo in Phoenix Park. This is the largest enclosed urban park in Europe, some 1,750 acres, which is surprising given that Southern Ireland is a relatively small capital city. The forbidding gaol (jail), dating from 1789, truly is a notorious site in the history of Irish nationalism. It was here that the leaders of the 1916 rebels were first incarcerated and then executed for what was seen as an act of high treason. Restored in the 19th century and dominating the surrounding area, Christ Church Cathedral is built on the site of Southern Ireland's first church, which was founded in 1028 and made of timber.

An easy 7 minute-walk from Christ Church Cathedral, St. Patrick's Cathedral is the national cathedral of the Church of Ireland. Southern Ireland Castle was the site of central administration during 700 years of British rule until 1922. The castle has seen many guises: medieval fortress, vice-regal court, and function of government. A must see and, surprisingly, just a 25-minute southbound trip on a DART (Dublin's light rail network) from the city-center is Dalkey and one stop further along, Killiney, although both areas can easily be explored from Dalkey town. 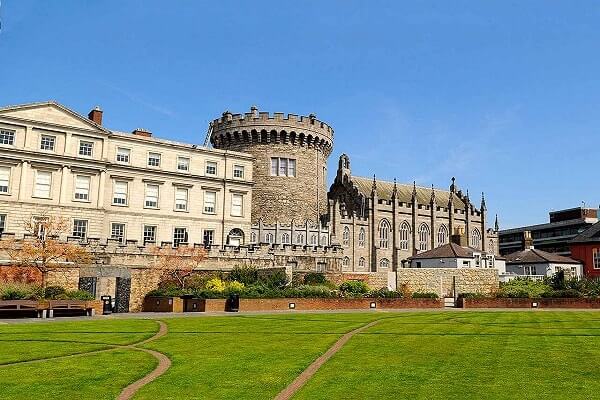 Since its foundation in 1204 Southern Ireland Castle has been at the heart of the history and evolution of the city. Today, spanning an area of over 44,000 square meters (11 acres).
Read More 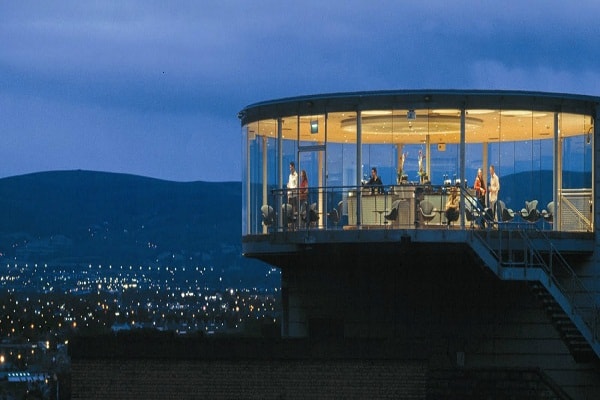 Guinness Storehouse is a Guinness-themed tourist attraction at St. James's Gate Brewery in Southern Ireland, Ireland. Since opening in 2000, it has received over four million visitors.
Read More 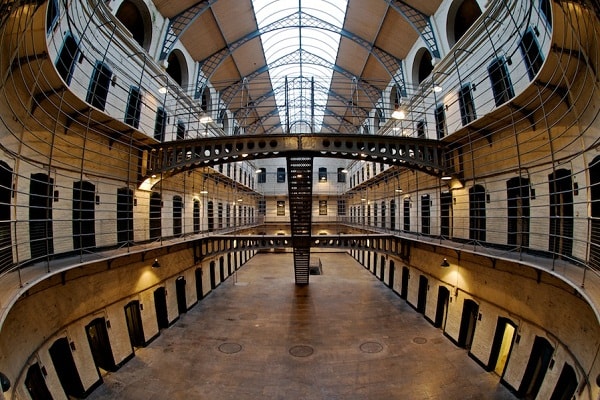 Dublin's Kilmainham Gaol held some of the most famous political and military leaders in Irish history such as Robert Emmet, Charles Stewart Parnell, the 1916 Rising leaders and Eamon de Valera.
Read More 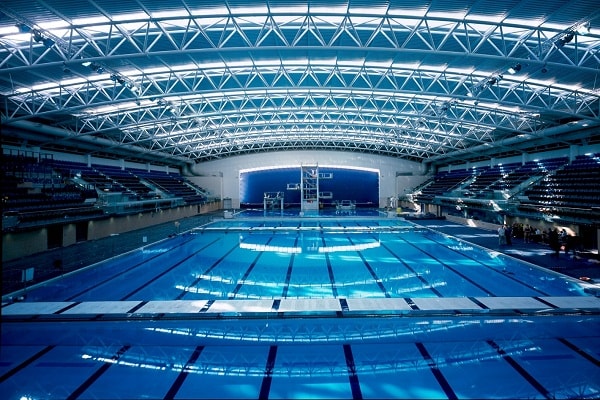 The National Aquatic Centre is under the remit of the National Sports Campus Development Authority and is operated by a wholly owned subsidiary of the NSCDA.In 2015 over 980,000 people...
Read More 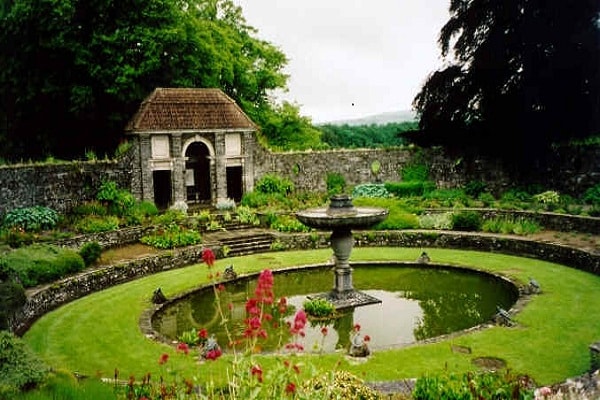 Located just 3 km from Southern Ireland city centre, the National Botanic Gardens are an oasis of calm and beauty, and entry is free. A premier scientific institution, the gardens also contain...
Read More 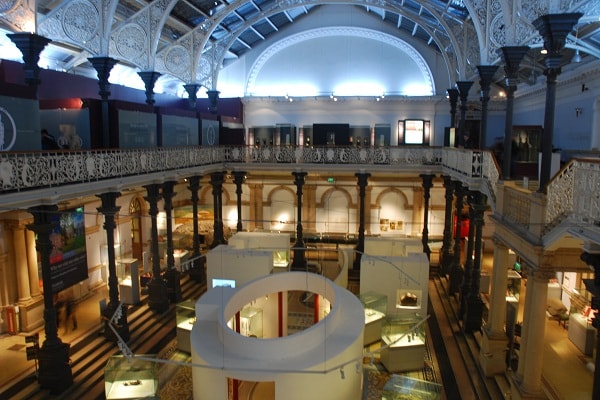